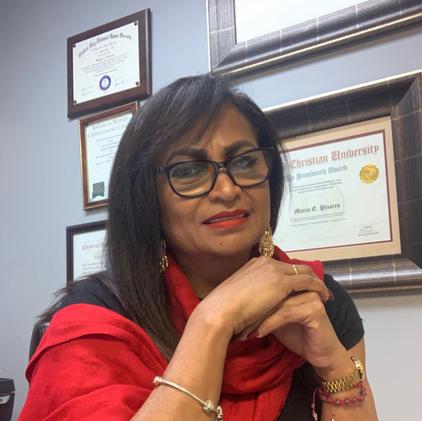 We are accepting new patients.

The Lord replied, " My child, My precious child, I love you and I would never leave you. During your times of trial and suffering, when see only  one set of footprints, it was then that I carried you"


Born in Brooklyn, NY and raised in Añasco, Puerto Rico. She was raised by her mother and is the middle sister of five children. She graduated with an associate degree in nursing at the University of Mayaguez in Puerto Rico on 1982. She worked as a Registered  Nurse at the Municipal hospital at Mayaguez, P.R. Until 1985. Then she relocated to Chicago, Illinois and worked as a registered nurse at the V.A. Medical Center for 6 years. She relocated to Miami, FL and she continued her studies, obtaining a Master degree in Nursing with concentration on Adult Mental Health, on 1998. After working for many years as an Advanced Registered Nurse in public clinics and private offices, she answered to God's calling in getting prepared as a Christian Counselor and graduated from Florida Christian University with a Doctorate degree in Christian Clinical Counseling in 2006. In 2004, she founded A New Path in Christian Counseling, Inc., a non-profit organization. She works as an Advanced Registered Nurse Practitioner, providing psychiatric services and Christian Counseling. Dr. Pizarro, has achieved her goals of providing a holistic care, not only attending the patients psychiatric needs but also emotional and spiritual needs. She is also, faculty at Ana G. Mendez University System , Metro Campus at Orlando, FL, since 2015.